by Connor Hill
He's no stranger to the Crailtap collective – we talk to Glenn Smith on his latest work for Girl Skateboards' Illuminated series. 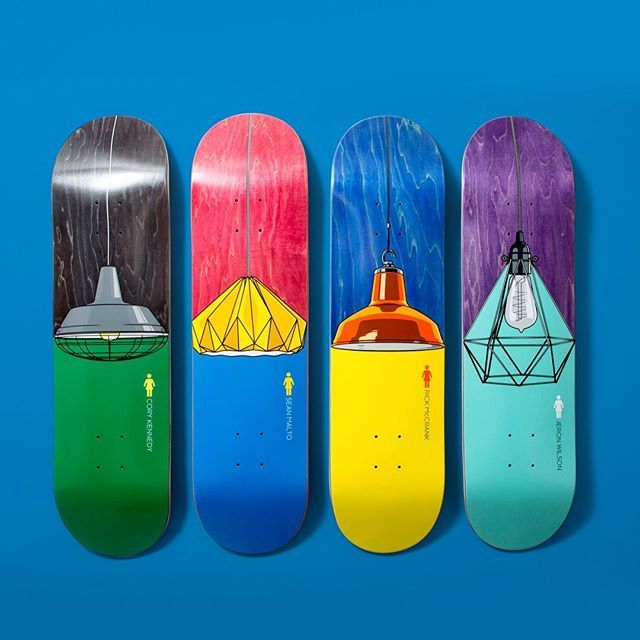 It’s not the first time you had your work used for Girl Skateboards’ graphics, right? What’s the process that’s involved, and how did this particular project come about?
Yeah that’s correct, the first time was the Letterbox series that came out early 2017, I actually designed them about 3 and a half years before that, they didn’t get used straight away. It was a big deal for me to have those come out, I never thought Id get the chance to do board graphics with Mike Carroll and Rick Howard’s names on them, those guys are legends.  I did have a board come out a year or two before, that was a collab with Girl and the skate store ‘The Good Room’ which I own with my partner Hales but I don’t really count that one as its not in their range for the world to buy.

This Illuminated series is my favorite so far. In regards to the process – it varies but usually I come up with the concept and artwork and send it to them to see if they like it. I have been building up a relationship with Crailtap (Girl) for a long time now so I’m not just some one out of the blue sending them artwork. The artwork is pretty much finished before I even show them so I run the risk of spending all that time and it just going to waste. I prefer to show finished work as I don’t feel I can show what it could look like if I just send a rough sketch. I personally like to see it finished, its just how I work, Ill stay up all night till something is finished. If they like it and want to run it then great. Sometimes Ill make changes if requested but this series came out as I originally proposed it.

What was the inspiration behind the lampshade graphics?
With the lampshades I like how they are an everyday object that are a part of everyone’s lives but they are also design objects that can become so iconic. To be honest I spend a lot of to time trying to come up with a graphic subject that hasn’t been done before, believe me that is pretty hard now-a-days.

I look at magazines, books etc away from the skate world for subjects that could be used and could work on the shape of a board. I have been a fan and followed Girl and Chocolate and their Art Dump department from when they started back in 93. Without writing a huge list I really like some of the older graphics, the ‘modern chair’ series Tony Larson did is an obvious standout, how clean it is and the subject seemed more mature and was completely different from anything else at the time. 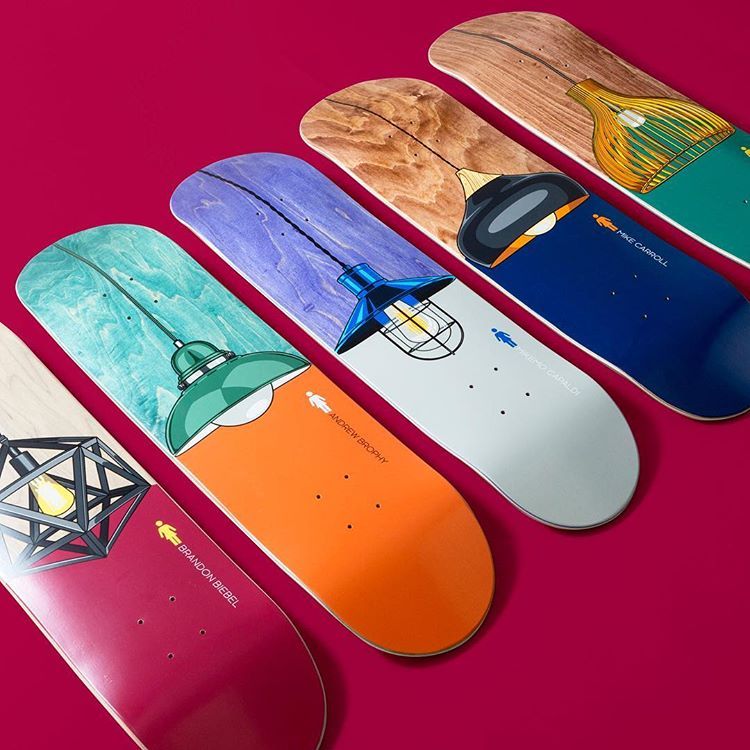 Do you have a favourite from the series?
Nah I don’t have a favorite from this series, I like them all as a set. Its kinda hard to pick a fav.

What other projects do you have in the pipeline?
I just had a one off board come out for Andrew Brophy on Girl – that’s just delivered to stores in the last few weeks. I’m working on some new concepts but none of those are complete or locked in yet.

I recently finished painting an OG wooden doll for an exhibition Girl are having which is fundraising for the Red Project. That was really cool as this package arrived a few weeks ago with a blank doll and a letter in it. I’m hyped to be a part of that exhibition next to artists/designers that are handpicked and people I have looked up to for a long time.

There are a few board graphics coming out for some other smaller brands and independent skate shops in the US in the near future, also a series of boards done for our store a little later in the year. I always have print designs on the go for clothing companies and other random design jobs. I have ideas for some personal projects but struggle to find the time to get to work on them, I’m planning on making more time for that.

/ Crailtap / Girl Skateboards / Glenn Smith / The Illuminated series
“Champagne” by Collab Distribution. Featuring new skateboarding from Kyle Svensen, Matt Vickery, Chase Collins, Chris Skelton, Matt Ferg and many more.
by David Read
Art, life, and skateboarding. The latest from Luvscene’s Caleb Dammert. Featuring Matt Ferg, Ben Gibb, Jamie Bucknor and all the homies.
by Manual Magazine
Acid NZ’s corrosive mind-bending tour of New Zealand’s South Island. From the Gypsy Pool to Benmore Dam and Dunedin’s Blood Bucket. No concrete is safe.
by Manual Magazine
It’s SOTY-season, so we tracked down New Zealand’s longest-running Skater of the Year — Simon Thorp. We talk BINZs, rigged votes and predictions for this year’s NZSOTY.
by David Read
After their debut Duckbrewe Skate Festival at Two Thumb Brewery in Christchurch last summer, Duckewe have returned with another hoppy beer collab, added three stages of music, a field full of spectators and an even wilder ramp design.
by George Read
Relentless rain can’t stymie vertical skateboarding progression. The Wellington Skateboarding Association’s “Ramp Riot 4” grows a year older while the talent gets younger. Stunts defy logic. The proof is in the pixels.
by David Read
From the Dazlog archives. Circa 2007-2014. Featuring: James Wright, Andrew "Muddy" Haeata, Tom Hull, Toby Locke, Jeff Sanders, Tom Snape and many more.
by Manual Magazine
To celebrate the launch of The Wayvee by Tyson Peterson, Vans New Zealand team riders and friends hit up the Public Library Showroom pre-lockdown to put Vans Skate's newest silhouette to the test.
by Manual Magazine
More from the Dazlog archives. Circa 2010-2013. Featuring Nico Gottschalk, Deen Rakich, Guy Collier, Simon Thorp, Brett Band, Marek Kocak, Chey Ataria, Tim Barnett, Adam Wharekawa and Darren 'Dazlog' Howman.
by Manual Magazine
Brett Band and friends from the Dazlog archives. Circa 2010-2015. Shot in New Zealand, Australia and Barcelona. Full of casual heavy hitters.
by Manual Magazine
The Rolling Meadows festival lives up to its name with the addition of the Duckbrewe skateboarding event.
by Manual Magazine
On Saturday Cambridge played host to the 2021 Ramp Attack & Acid Invitational. Carnage ensued as crews from around the country came together to session the purpose built, multi sectioned ramp in Leamington Domain. See how it all unfolded below:
by Manual Magazine
The new skateboard video by Brett Chan. Featuring the pure talents of Ben Gibb, Chase Collins, Andrew Morrison, Mikey Gibson, Elijah Robertson and Kyle Svensen.
by Manual Magazine
The window to make a submission closes at midnight this Sunday. We urgently need as many people as possible to make submissions asking for investment in skateboarding.
by Kevin Francis
Vans have completely redesigned the Skate Classic range with the skater in mind. To celebrate the release, we got the New Zealand team together to party, piñata-style. A smashing good time was had — literately.
by Manual Magazine
To improve Wellington’s skateboarding facilities you need to act now. Councillors need to hear from you THIS WEEK. Read Kevin Francis’ call for help.
by Kevin Francis
BOWLZILLA Wellington 2021 — the National Park Skating Championships —  was the cure for 2020.
by Manual Magazine
Wellington will be the Capital of Skateboarding once again on the 27th of March when it hosts BOWLZILLA Wellington for the 6th year in a row.
Press Release
The Vans Mangawhai Bowl Jam, presented by Backdoor NZ, celebrates a decade of roof-raising radness.
Press Release
If you can't make it to the stands in person, you can get bowl-side from the comfort of your couch. Here are all the links to the live stream for the 2021 Mangawhai Bowl Jam.
by Manual Magazine