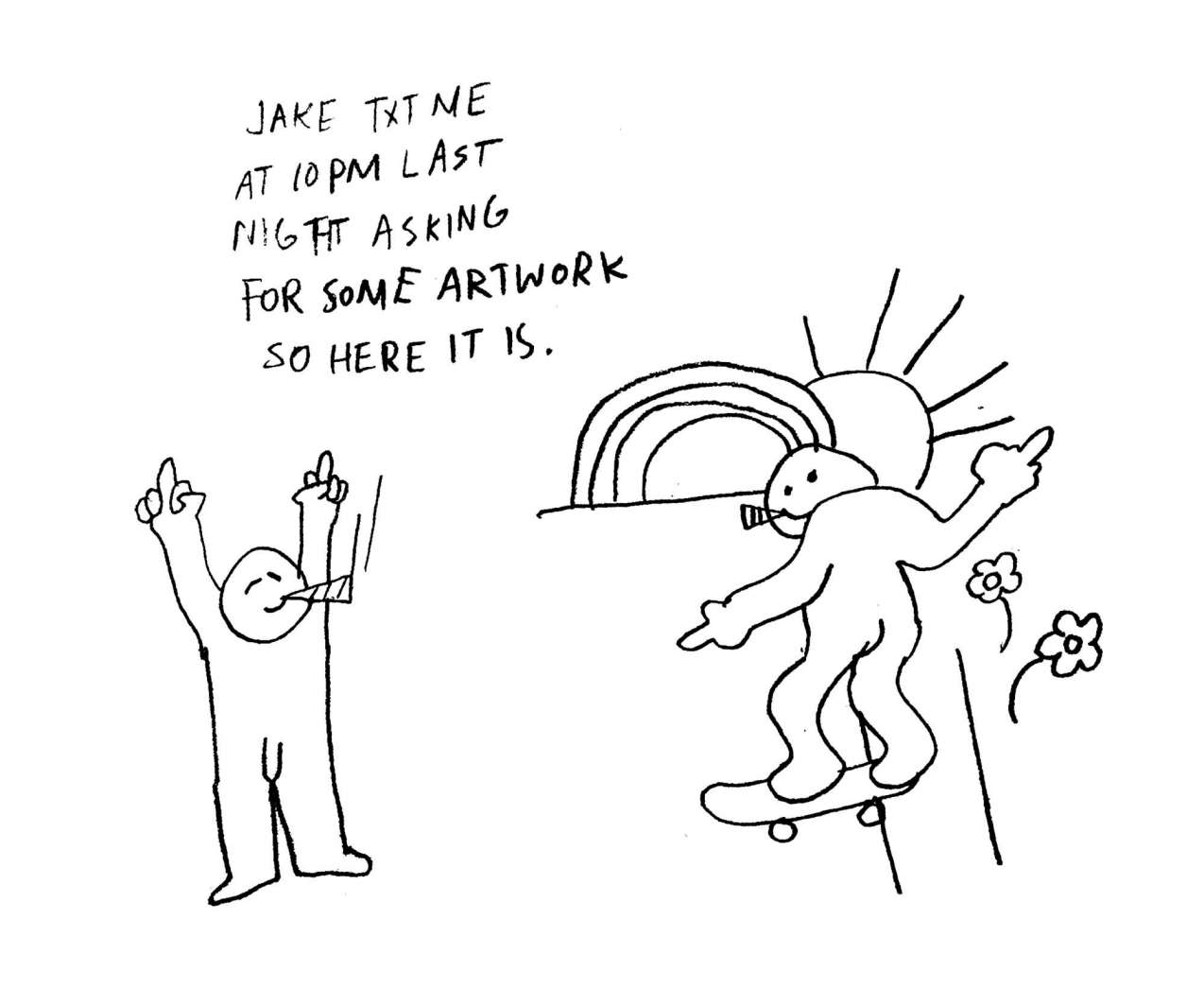 Never one to embrace negativity, Smiddy’s beer is always half full. This outlook is expressed in all of his carefree Kiwi classics he pumps out every time he gets behind a pen. His ability to observe and absorb his surroundings has made him a very capable skateboarder, but more impressively, one of the country’s most exciting graphic designers and creative journeymen. More down to earth than the roots of a rimu tree, Smiddy’s ability to listen to one’s imagination, take into account the environment it will be playing in, and produce illustrations that supersede any client’s expectations will pave his legacy. He’s a true brand builder who’s been establishing establishments ever since going out on his own business in 2015. Steadily stacking recognition and respect, his proven track record will see him enhancing the organisations he desires throughout his career. Whether it’s a new logo for the All Blacks, branding a chain of top restaurants, copywriting for the Green Party or creating your favourite T-shirt, Smiddy is deserving of every bit of success he’ll experience in life and I’m more than hyped to see what this breather from Hawkes Bay manages to create for himself through creating for others! | Nick Mason 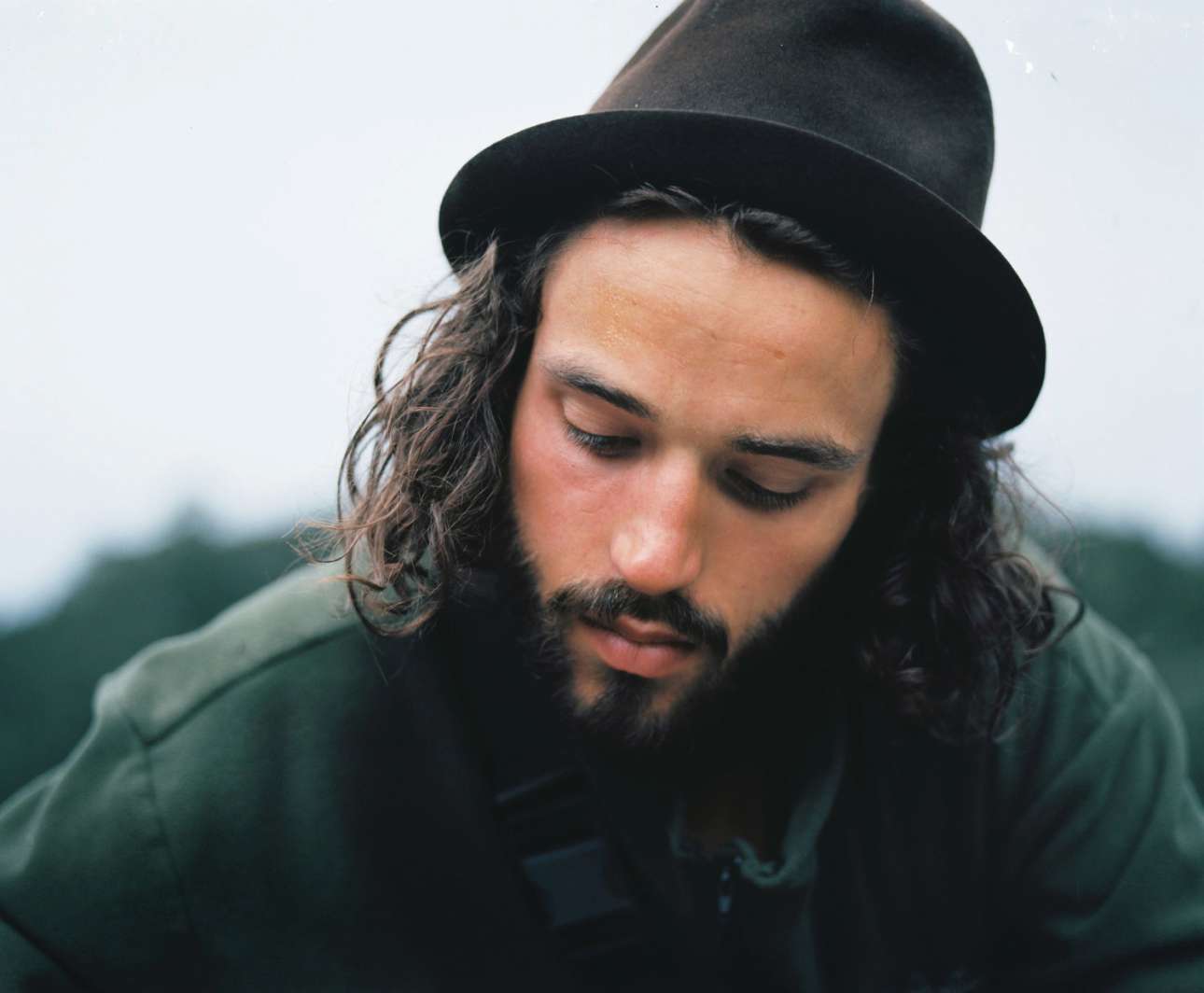 Mahi Mains Mane is the quintessential snowboarder New Zealand needs. True to his name, Mahi is living evidence that if you put in the work, you’ll see the rewards. Just look at any Southern Hemisphere publication or vid clip that’s come out in the last three years. The dude has bagged cover after cover, interviews on top of interviews; his exposure meter is definitely flashing. I would assume it must have been pretty dope for him coming from Queenstown, growing up in the wake of the legacy left by the Dero crew (who are all damn near 40 these days). But rather than following in their footsteps, Mahi’s put the team on his back and is carving his own path. He’s showing us all how to snowboard in Alaska on a dirtbag’s budget, unlike a lot of the younger generation coming through now who tend to follow the quad corked road to riches, while chasing the five-ring dream. Mahi is on his own programme. He’s doing things his way, staying true to his way of life and leaving a legacy of his own that I can only hope influences the next generation. At his age, Mahi is the snowboarder I wish I was and I can’t wait to see where his raw talent progresses to in years to come. | Roland Morley-Brown 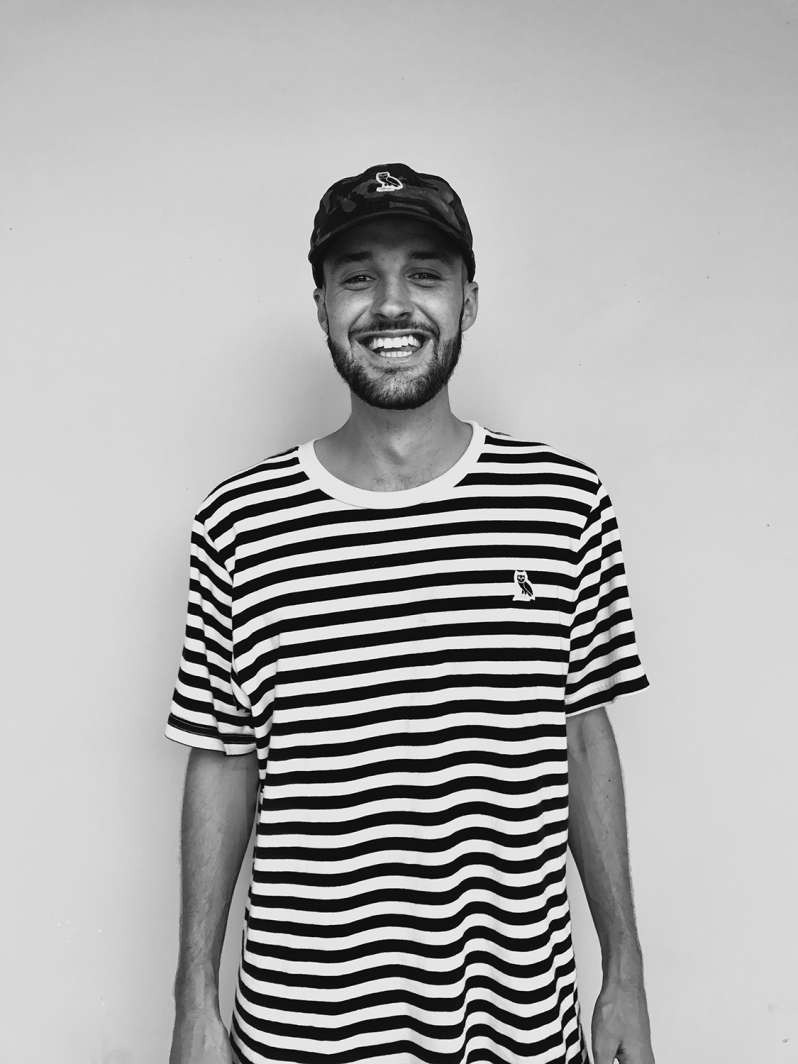 No disrespect to the Old Guard of Skate Photography, but in terms of technique and style, the brakes went on ages ago. Thankfully, it’s inevitable in any industry a new generation sweeps through and shakes up the old and if you’re not gonna move with it, you best get out the way. Jake Darwen is the photographic juggernaut at the forefront of that advance, and he’s not stopping for anyone. For editors outside of Australasia, it must be like he came out of nowhere, and to a large extent he has. From photographing his school sports day to shooting covers of all the big international skate mags in the space of a few years, you could argue that nobody saw it coming. Those that know him well knew better. He’s a quiet observer, taking in and absorbing info. He has an internal filter, discarding the stale or old, able to take the technique and info he wants, improving and creating as he goes. Whether he knows it or not, he’s already had a massive influence on the way a skate photo is taken, no small feat for a boy from Auckland’s North Shore. You only have to pick up a recent magazine and compare images to see that he’s leagues ahead of the big names in every way. You could be forgiven for thinking the others simply stopped trying. So if you’re young and coming through with a camera in hand today and looking for advice, forget the Photo Fossils, you’d be better off sliding into Jake’s DMs. | Mark Barber 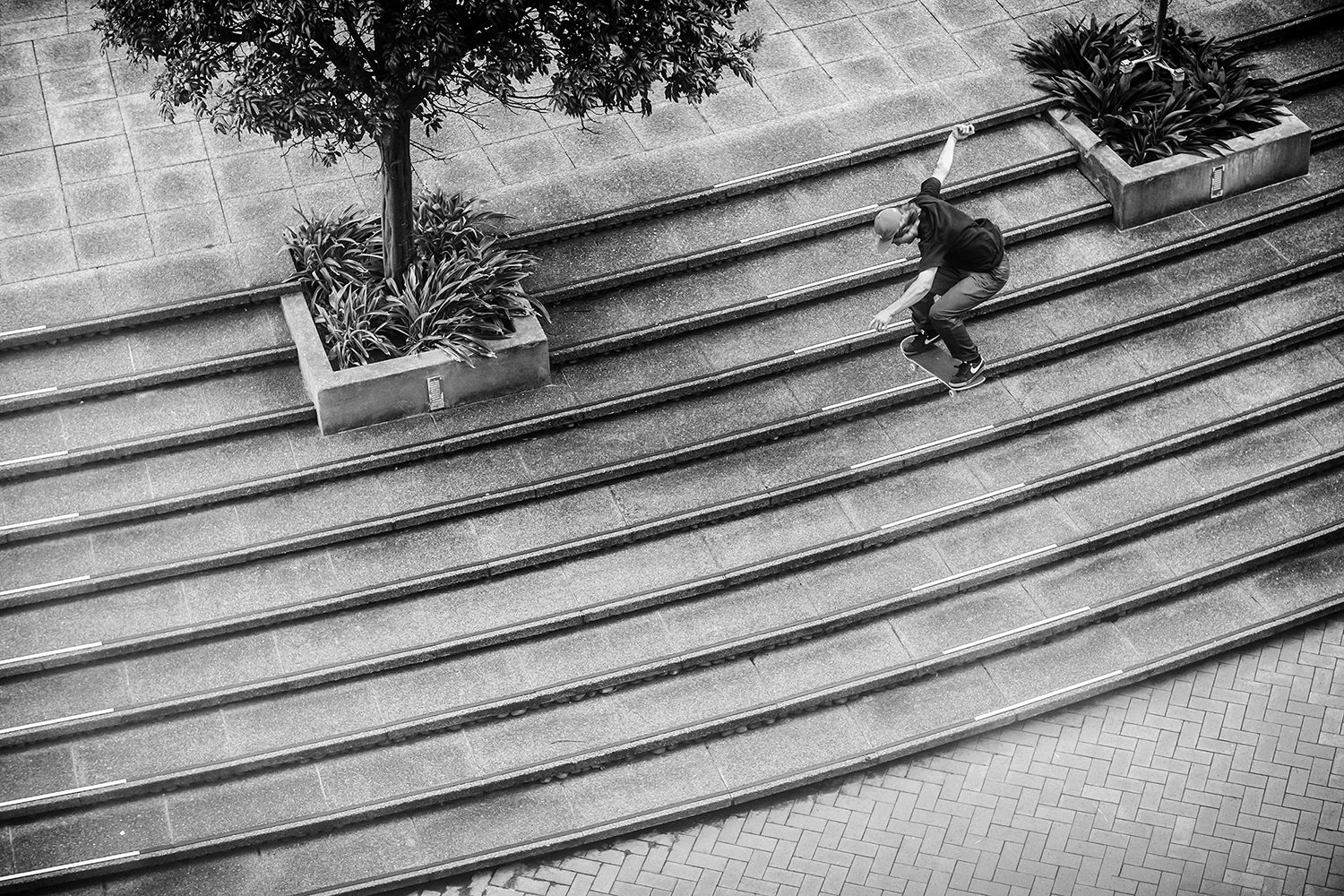 Motivated by having fun with the boys, PJ skates most days and is pretty much always smiling. He’s more interested in what older Dunedin skaters living abroad are up to than random pros, and has grown from a fluoro Deathwish kid to a chili-eating, fulltime welding machine. His bag of tricks is massive, he skates everything and because he’s motivated by the best things, you’ll most likely see him in Manual’s 40 year anniversary issue too.| Craig Strong

It was the early 2000s and I’d just moved back to Christchurch. It was late and I was catching the last bus home from the bus exchange. This young kid walked in carrying a skateboard, dressed better than anyone in the depot and stinking of booze. When I was paying for the ticket Shannon interrupted and told me he liked my graffiti. As I was feeling like a B-grade celebrity he told me not to fucking talk to him on the bus as he wanted to listen to Oasis and zone out. I sat in my seat and watched him do exactly that. I thought to myself, ‘who the fuck is that’?| Joel Rickerby

/ Art / Illustration / Jake Darwen / Logan Smith / Mahi Mains / New Blood / Part Three / Photography / Pj Wybrow / Shannon Rush / Skateboarding / Snowboarding
BOWLZILLA Wellington 2021 — the National Park Skating Championships —  was the cure for 2020.
by Manual Magazine
In the late 1980s, New Zealand skateboarder Lee Ralph had the world at his feet. But right when he seemed poised to join the sport’s elite, he was kicked out of the US – and out of the limelight.
by Manual Magazine
Wellington will be the Capital of Skateboarding once again on the 27th of March when it hosts BOWLZILLA Wellington for the 6th year in a row.
Press Release
The Vans Mangawhai Bowl Jam, presented by Backdoor NZ, celebrates a decade of roof-raising radness.
Press Release
If you can't make it to the stands in person, you can get bowl-side from the comfort of your couch. Here are all the links to the live stream for the 2021 Mangawhai Bowl Jam.
by Manual Magazine
Robin McArthur-Adams and Mikey Gibson band together for 11 minutes of footage captured from some of the most heavy sessions between Auckland and Wellington from the past six months.
by Manual Magazine
Two-thumbs Brewing Co. hosted “Duckbrewe Skate Festival” at their Christchurch site last month. Watch as a hoard of skateboarders duck and weave amongst a sea of ply on a specially-made ‘mini Chin' ramp.
by Manual Magazine
With a borrowed camera and a beholding eye, Brett Chan makes another masterful move. This is this summer's gambit.
by David Read
Geoff Campbell casts another who’s who of Melbourne’s four-wheeled underbelly. Like a slappy through a buttery curb, this one is a cut above.
by Manual Magazine
Collab Distribution proudly presents DECO, a New Zealand skateboard film. Pulling inspiration from Art Deco detailing and global air travel with clips filmed across New Zealand through to Sydney and Los Angeles.
by Manual Magazine
Shane Smith delivers potent messages, and skateboarding, in the latest edition of his Skunk video series. Friends, foes and Auckland's finest making good use of the city streets.
by Manual Magazine
Vans releases the first Colourway for Australian Rider Jackson Pilz — available now.
Press Release
Start your year off with a bang. Join us at one of New Zealand's premier skateboarding events — The Mangawhai Bowl Jam. With 2021 marking the event's 10th year this will be one not to miss.
by Manual Magazine
Christmas is a special time. Made better by friends, good times and special treats like this little gem from the plazas and pathways of the Capital. Max Sceats keeps on giving with Chrimat Speciale.
by David Read
Shamus Peters and Mikey Gibson bare all in this exposé from Auckland city's slick street. Captured by the one, and only, Brett Chan.
by Manual Magazine
There's nothing better than waking up to a new Daylight video. Mikey Gibson, Nico Tognazzo, Jack Fagan, Jonty Hoggard, PJ Wybrow, Simon Fraser-Mackenzie, Shamus Peters, Elijah Robertson and Robin McArthur-Adams feature in Luke Browne's latest joint.
by David Read
This 10-minute volume of VX footage shows Tai Wepa as an unstoppable force. The Hawkes Bay transplant fires it up in Adelaide.
by Manual Magazine
Slipping through customs just before lockdowns plagued the pacific, and other parts of the world. The exploits of RVCA Australian skate team, pre pandemic.
by Manual Magazine
Tylre Houldsworth joins the Trainers SB, Auckland team. The occasion is celerated with an edit, for your viewing pleasure.
by Manual Magazine
$5k of prizes up for grabs at Duckewe’s ‘mini-chin’ ramp festival.
by Manual Magazine