As usual it was a beautiful day in the winterless north the contest coincided with the Kerikeri ½ marathon the final event in the Sport Northland Run/Walk Series and the annual Street party there was a great atmosphere in the town. With a lot of the public stopping to watch the vert comp.

Skaters travelled from throughout the country with Christchurch Wellington and Auckland all well represented as well as a good turn out from the locals.

The highlight of the day would’ve been the passing of the torch with Billie Morrison daughter of Andrew Morrison taking first place in the Women’s division in her first contest.

Like all good contests – there was an afterparty, at the infamous Crabb Cove, where there’s no shortage of skate-able obstacles from a custom built backyard pool (the work of Premium Skateparks) along with a mini ramp, with lights, which was skated till the early hours of the morning.

It was a great excuse to catch up with our friends from around the country and skate together. New Zealand still has a strong vert scene with the next contest, taking place at Wellington’s Kaori Vert ramp on the December 1st.
| Nicholas Bennett 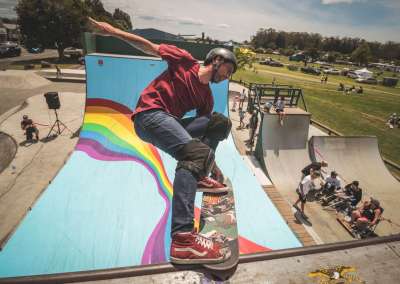 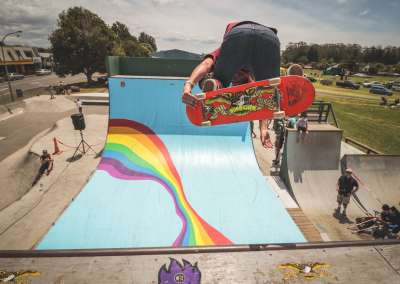 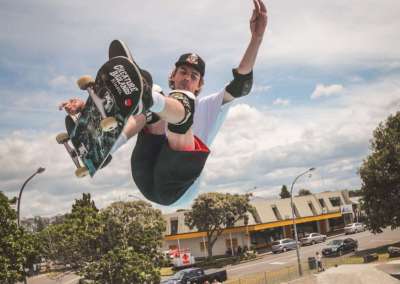 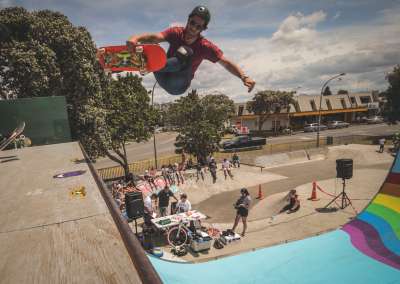 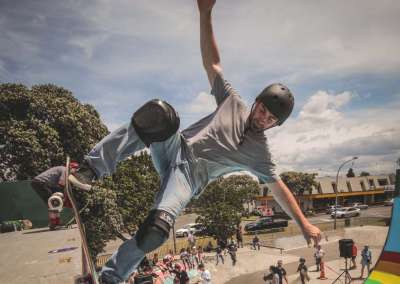 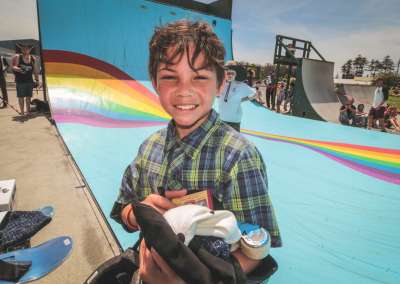 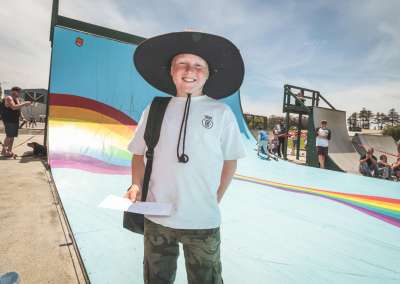 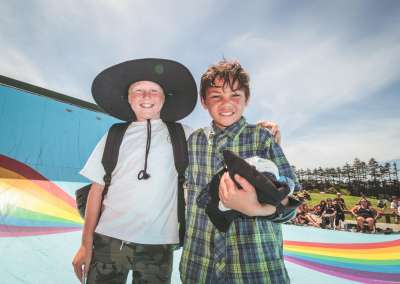 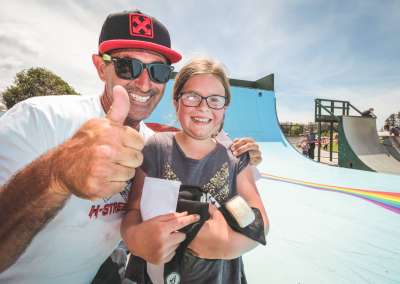 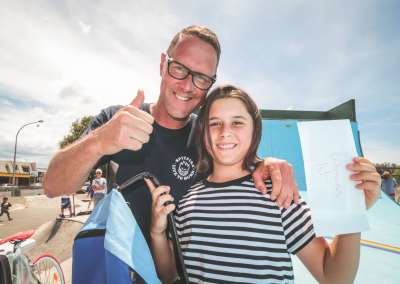 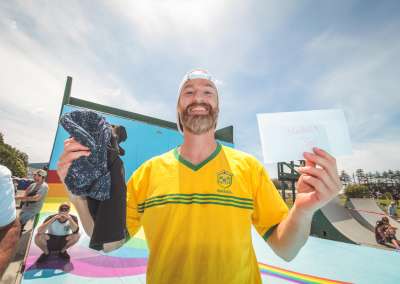 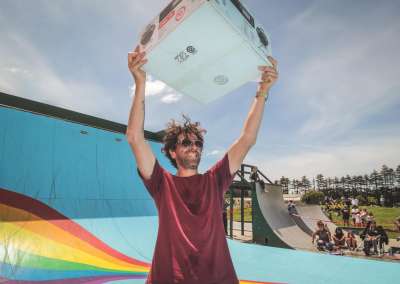 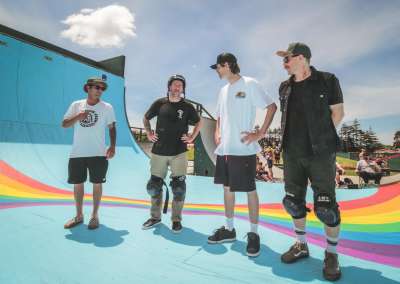 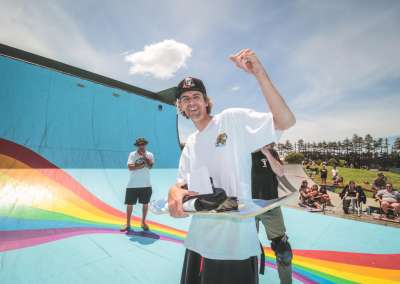 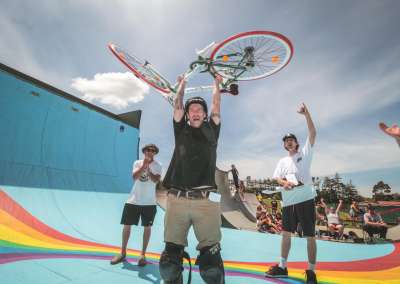 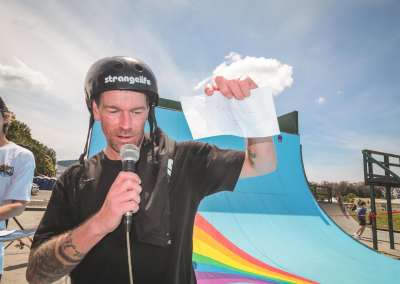 / Andrew Morrison / Billie Morrison / Chris Wood / David Crabb / Hamish Stewart / Kerikeri / Nicholas Bennett / NZ SKateboarding / Vert Is Dead
A new skateboarding film by Will Bartlett. Fast and loose from the grid city and beyond.
by Manual Magazine
A postcard from the South. Proud, bent and stacked with clips.
by Manual Magazine
On April 22nd Vans New Zealand team riders, friends & local skate stores got together at Public Library to test out The Lizzie shoe. It was an epic Friday night full of non-stop skating, delicious food and good times.
by Manual Magazine
There’s the party in the hills and streets of Tāmaki Makaurau. Join in the festivities with Robin McArthur-Adams, Shamus Peters and friends.
by Manual Magazine
Art, life, and skateboarding. The latest from Luvscene’s Caleb Dammert. Featuring Matt Ferg, Ben Gibb, Jamie Bucknor and all the homies.
by Manual Magazine
There’s most definitely more to skateboarding than skateboarding. That’s why we do it. And this video shows it.
by Manual Magazine
New from adidas Skateboarding by way of Free Skate Mag. The trefoil brand showcases their Australasian team, with a good smattering of Kiwi.
by Manual Magazine
Acid NZ’s corrosive mind-bending tour of New Zealand’s South Island. From the Gypsy Pool to Benmore Dam and Dunedin’s Blood Bucket. No concrete is safe.
by Manual Magazine
Take a roll through the Capital’s plazas and waterfront in Max Sceats’s new joint. Hunter Lander-Smith starts things off, introducing a host of humans. Niwa Warner closes off with a bag full of bangers.
by Manual Magazine
There’s always been something special about skateboard videos from Christchurch. Majick delivers another quality dose featuring the ledges, plazas and flat bars synonymous with the Grid City.
by David Read
More than a literal tour of “The Whole Bowl” at Otautahi Christchurch’s Washington Way. Shaka Wereta, Adam Wheeldon and Krysta Ashwell show us the lines they know well.
by Manual Magazine
The sun is shining. Grow your hair out and work on your tan. Go skateboarding too! Jacket Potato (Shane Smith) delivers more “Skunk.”
by Manual Magazine
A bunch of semi-old farts show they still have plenty of wind left in them. Justin Keeley and Bjorn Johnston lead a ragtag of friends in LOTSW.
by Manual Magazine
Despite the efforts of do-gooders, Alexei Foster and crew push through with Bar-None’s latest skateboard video, “Public Hero,” featuring Auckland’s newest breed.
by Manual Magazine
It’s SOTY-season, so we tracked down New Zealand’s longest-running Skater of the Year — Simon Thorp. We talk BINZs, rigged votes and predictions for this year’s NZSOTY.
by David Read
After their debut Duckbrewe Skate Festival at Two Thumb Brewery in Christchurch last summer, Duckewe have returned with another hoppy beer collab, added three stages of music, a field full of spectators and an even wilder ramp design.
by George Read
Hidden in the leafy outreaches of West Auckland lives the most premium of backyard pools. Purpose-built by none other than Jason Parkes, this slice of California is deep and steep.
by Manual Magazine
Kevin Francis’s stellar part from the “Let it Roll” video, a Wellington skateboarding film by Jason Gallant released in 2014.
by David Read
Relentless rain can’t stymie vertical skateboarding progression. The Wellington Skateboarding Association’s “Ramp Riot 4” grows a year older while the talent gets younger. Stunts defy logic. The proof is in the pixels.
by David Read
The Blood Bucket is a hard pill to swallow. Forty years of tenderising minds and skin came to a head this past weekend with the anniversary skate jam. Iconic, brutal and unforgiving. Watch the locals' lines and the new blood cut it down.
by Manual Magazine