by Manual Magazine
There were record crowds and stoke at the 9th Mangawhai Bowl Jam competition. We were there to witness all the epic skateboarding. Check out the video highlights and all the best photos from the event right here.

“Everyone encourages each other and the camaraderie is incredible.” – Veteran skateboarder and honorary Mangawhai local, Andrew Morrison

Heaving crowds, outstanding skateboarding and camaraderie defined the atmosphere in the town of Mangawhai on Waitangi weekend 2020.

Over 70 skaters, ranging from eight to 55-years-old, from all corners of New Zealand and Australia descended on the coastal town. Not to battle it out, but to inspire and drive each other, pushing their limits in one of the most inclusive and positive skateboarding events we’ve seen to date on the New Zealand bowl circuit.

As organiser Jesse Peters puts it. “I am a little biased, but I think we have the most incredible community of people that comes together to enjoy world-class skateboarding in an environment that feels inclusive. That’s a pretty big thing for me.”

A record crowd of over 2000 people, made up of locals, families and fellow skateboarders were clinging to every spare spot of the expanded seating. The expressions of enthusiasm, cheer and sheer amazement were infectious. You couldn’t help but feel one with the skaters as they pushed themselves, responding to the excitement and openness of the crowd, as they were egged on by flavoursome MC Jay Smith.

Open winner Jacob Robinson from Ballina, Gold Coast made his first trip to Mangawhai this year and left a lasting impression. The energy shared between him and former Bowl Jam champion Bowman Hansen (2nd) was obvious. The pair, who skate together regularly, pushed each other further and further, bettering each previous run. Shaun Boucher (3rd), Chris Wood (4th), Nixen Osborne (5th) and Josh Wilson (6th), amongst others, made it a final to remember. It felt like an afternoon session at the local, but turned up to 11, and with a stadium-sized crowd hanging on every move.

One of the defining parts of this year’s event was the progression and drive of the women contenders. 19 year old Taniah Meyers of Coolum Beach led the charge in her return to the event, and podium. An inspiration for up and coming women skateboarders who are following in her footsteps. The power and drive of her skateboarding is a force, and not only in her discipline. This year she also brought her signature style to the Open division – a sure sign that the landscape is changing.

This year you could see it had more than rubbed off on her peers – a significant lift in the prowess of all the women skaters was obvious. As Taniah describes, “The number of girls and level of their skating keeps growing and getting better and better! The 9th annual Bowl Jam was incredible and I can’t wait for next year.” Krysta Atwell of Christchurch and Lucca Landon-Paniora of Auckland joined her on the podium in second and third respectively.

“It felt like a big family reunion, it’s the best getting to see everybody and skate with them. The talent that comes through is unbelievable and is so rad to watch. I also think the location plays a big part of it too. Mangawhai is so beautiful, and that bowl is incredible.” Amber Clyde, Competitor, and Women’s skateboarding Advocate and Coach.

Veteran skateboarder and Mangawhai advocate Andrew Morrison’s immaculate delivery couldn’t be contested, despite a hot-on-his-heels field of his peers. Morri’s seemingly endless runs were accentuated with style and poise at every turn. His vocabulary of tricks and fluidity unmatchable on the day. He was closely followed By Ramon Thackwell (2nd) and Steve Nickolls (3rd) who showed that being a master is all about class, not just moves.

12-year-old Zedyn Fellows of Wanaka caught the full attention of the crowd. His precision and consistent ramp-style skating rewarded with first place in the Under 16 division. Blasting judo and Christ airs in almost every run without faltering. A near make of a Mctwist in the Best Trick session is a sign of the promise and determination that he possesses. He was followed closely by veteran Under 16 Rico Henare (2nd), and Liam Hayes (3rd) who was branded the Blue Bullet for his colour-coordinated freight-train-running style.

Ramon Thackwell, President of Skateboarding.NZ, and competitor explains the unique experience of the Mangawhai Bowl Jam. “True to the heart of skateboarding, MBJ runs on warm camaraderie rather than rigid protocol. It gives space for new talent to shine both on the board and behind the scenes. New friendships from far and wide, formed during the week of this event, further grow and solidify the tight community that is New Zealand skateboarding.”

For all the incredible skateboarding that went down over the weekend the atmosphere was the true champion of the event. This was a representation of the positive energy that surrounds Mangawhai.
Made possible by the passionate people who make The MAZ (Mangawhai Activity Zone) thrive, and their vision to create a home for a world-class facility in their bustling coastal paradise. This has provided the perfect platform for the Mangawhai Bowl Jam to exist and grow to what it is today: A world-class event with an unmatched ambience. A testament to Jesse Peter’s dedication to skateboarding and a draw card for a magical town.

Scott Manwaring of local business Bespoke Homes, a skater and sponsor of the event has watched the event grow over the years. “It’s a fantastic event that gains momentum and status each and every year. It has a positive effect on local businesses, especially food and hospitality. The community fully supports and immerses itself into the event, and it creates a great deal of hype around town. I believe it helps the cause of the Mangawhai Activity Zone—a park built through community funding—greatly. The community sees the relevance of all the investment.”

The credit for success lays with a range of people, inside and outside the community of Mangawhai. Jesse Peters shares some parting thoughts. “The biggest ‘thank you’ to the sponsors who back the event and make it possible. To the crowd for being the best crowd any event could ever ask for. The skaters for traveling from near and far to compete and put on a world-class display of skateboarding, and to the Mangawhai Activity Zone and wider Mangawhai community for accepting this ragtag group of people with open arms every year.”

Until next year, when MBJ turns 10. Bigger and better, if that’s possible 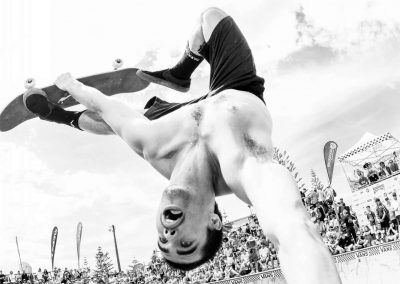