Exclusives / From The Mag

Text by David Read
Oversupply, prison pen pals, poltergeists, cover royalty and two birds one stone. Just a few of the stories from behind the scenes of Manual. 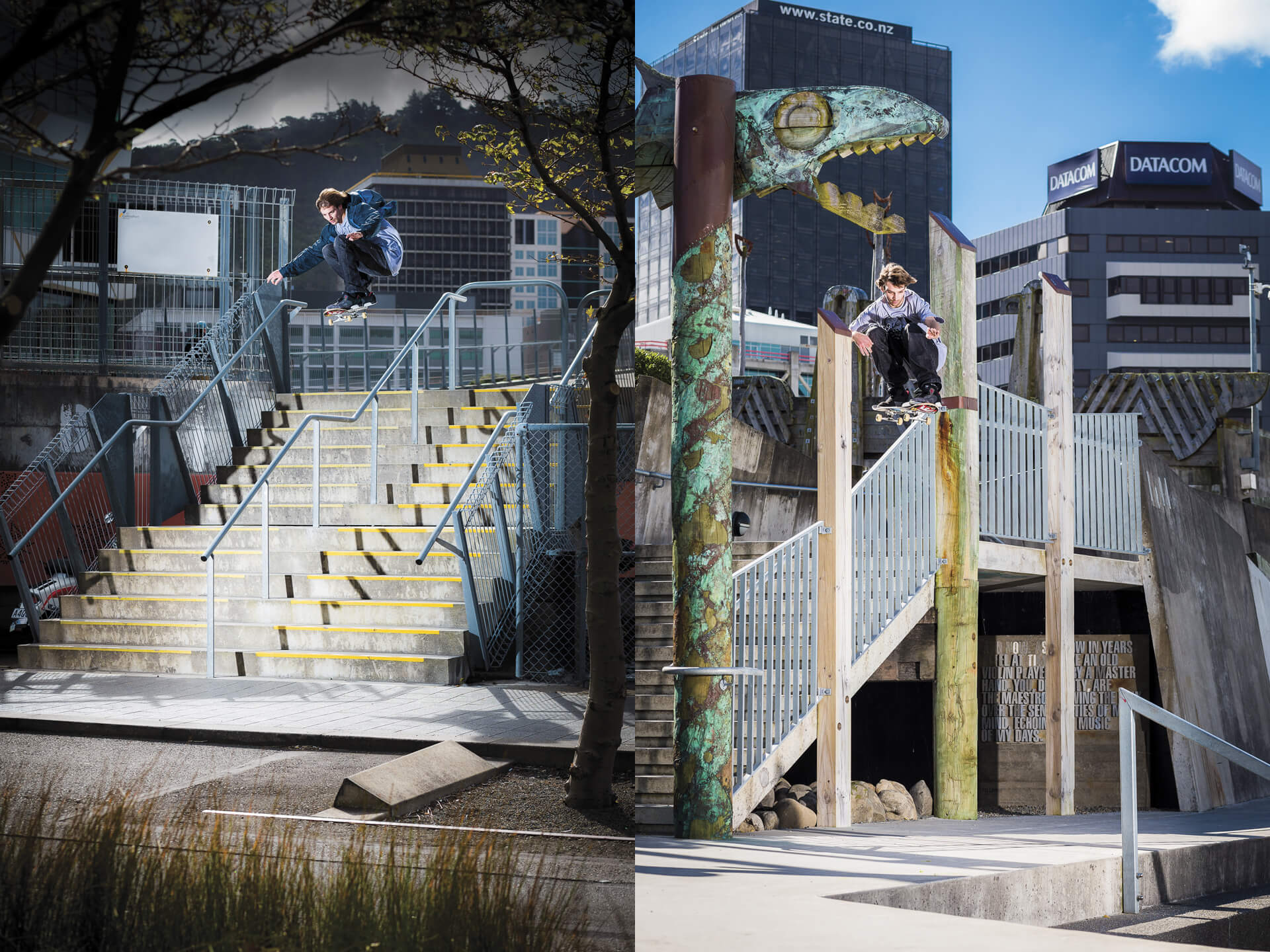 Tackling two giant ollies—the rugby union double set for issue 53 and eight issues later his thread-the-needle ollie at the Frank Kitts Lagoon made it to the front of issue 61.

1. The first edition of Manual was mostly paid for by one advert for iconic Wellington shop The Boardroom, where all the co-founders of the magazine worked. The remainder was paid for by David working one eight hour shift as a labourer on a printing press at his father’s printing firm, Lithoprint Ltd.

2. Issue 10 was the first edition sold at the newsstand. The distribution firm were late in providing info on allocations of the mag, so a guess was made as to how many to print. Being completely green and knowing very little about how many issues ‘proper’magazines actually printed, we made a wild guess. That guess happened to be about double the amount we needed. It took about five or six years to properly ‘distribute’ that issue. Lesson learned.

4. For the first few issues we used Caleb’s dad’s email address to run the magazine. We only had pagers and fax machines back then. We thought we were so cool.

5. In the beginning we had a lot of friends who rode BMX. Wellington was a tight-knit crowd; it didn’t matter what your weapon of choice was. Despite them ruining our ledges, they featured in the magazine a bunch during the first few years. When Caleb and his wife Emma started a biking magazine, we cleaned house.

6. Issue 36 is the only edition to have been changed for its Australian release. The cover features the same image (Adam Kinsman, melon into bank) as the New Zealand edition, but was printed in colour for Australia. The mag also features a revised page count.

7. Aside from the occasional letter asking for free stickers (it helps when you include your address) and bills, the only real mail we ever got were letters from skaters in prison, and that one letter about poltergeists.

8. The strangest adverts we’ve ever printed were for an apparel company claiming drunken technology, one targetting tartanconnoisseurs, a second hand skateboard shop and a Vespa repair service.

9. There are a number of elite who have graced the cover of Manual more than once. Bjorn Johnston and Roland Morley-Brown have both featured on the cover three times. Brothers Mat and Adam Kinsman (technically three; see point 6 above), Matt West, Rhys Campbell and Rush Fay have all featured on the cover twice. But no one really trumps Karl Truell, who shot two covers in one afternoon with the same trick at two different spots.

/ 20 Years of Manual / From the Mag / NZ SKateboarding / Revealed
It’s SOTY-season, so we tracked down New Zealand’s longest-running Skater of the Year — Simon Thorp. We talk BINZs, rigged votes and predictions for this year’s NZSOTY.
by David Read
After their debut Duckbrewe Skate Festival at Two Thumb Brewery in Christchurch last summer, Duckewe have returned with another hoppy beer collab, added three stages of music, a field full of spectators and an even wilder ramp design.
by George Read
Relentless rain can’t stymie vertical skateboarding progression. The Wellington Skateboarding Association’s “Ramp Riot 4” grows a year older while the talent gets younger. Stunts defy logic. The proof is in the pixels.
by David Read
From the Dazlog archives. Circa 2007-2014. Featuring: James Wright, Andrew "Muddy" Haeata, Tom Hull, Toby Locke, Jeff Sanders, Tom Snape and many more.
by Manual Magazine
To celebrate the launch of The Wayvee by Tyson Peterson, Vans New Zealand team riders and friends hit up the Public Library Showroom pre-lockdown to put Vans Skate's newest silhouette to the test.
by Manual Magazine
More from the Dazlog archives. Circa 2010-2013. Featuring Nico Gottschalk, Deen Rakich, Guy Collier, Simon Thorp, Brett Band, Marek Kocak, Chey Ataria, Tim Barnett, Adam Wharekawa and Darren 'Dazlog' Howman.
by Manual Magazine
Brett Band and friends from the Dazlog archives. Circa 2010-2015. Shot in New Zealand, Australia and Barcelona. Full of casual heavy hitters.
by Manual Magazine
The Rolling Meadows festival lives up to its name with the addition of the Duckbrewe skateboarding event.
by Manual Magazine
On Saturday Cambridge played host to the 2021 Ramp Attack & Acid Invitational. Carnage ensued as crews from around the country came together to session the purpose built, multi sectioned ramp in Leamington Domain. See how it all unfolded below:
by Manual Magazine
The new skateboard video by Brett Chan. Featuring the pure talents of Ben Gibb, Chase Collins, Andrew Morrison, Mikey Gibson, Elijah Robertson and Kyle Svensen.
by Manual Magazine
The window to make a submission closes at midnight this Sunday. We urgently need as many people as possible to make submissions asking for investment in skateboarding.
by Kevin Francis
Harry Kidman and his trusty VX delivering a real treat!
by Manual Magazine
Vans have completely redesigned the Skate Classic range with the skater in mind. To celebrate the release, we got the New Zealand team together to party, piñata-style. A smashing good time was had — literately.
by Manual Magazine
To improve Wellington’s skateboarding facilities you need to act now. Councillors need to hear from you THIS WEEK. Read Kevin Francis’ call for help.
by Kevin Francis
BOWLZILLA Wellington 2021 — the National Park Skating Championships —  was the cure for 2020.
by Manual Magazine
Wellington will be the Capital of Skateboarding once again on the 27th of March when it hosts BOWLZILLA Wellington for the 6th year in a row.
Press Release
The Vans Mangawhai Bowl Jam, presented by Backdoor NZ, celebrates a decade of roof-raising radness.
Press Release
If you can't make it to the stands in person, you can get bowl-side from the comfort of your couch. Here are all the links to the live stream for the 2021 Mangawhai Bowl Jam.
by Manual Magazine
Robin McArthur-Adams and Mikey Gibson band together for 11 minutes of footage captured from some of the most heavy sessions between Auckland and Wellington from the past six months.
by Manual Magazine
Two-thumbs Brewing Co. hosted “Duckbrewe Skate Festival” at their Christchurch site last month. Watch as a hoard of skateboarders duck and weave amongst a sea of ply on a specially-made ‘mini Chin' ramp.
by Manual Magazine